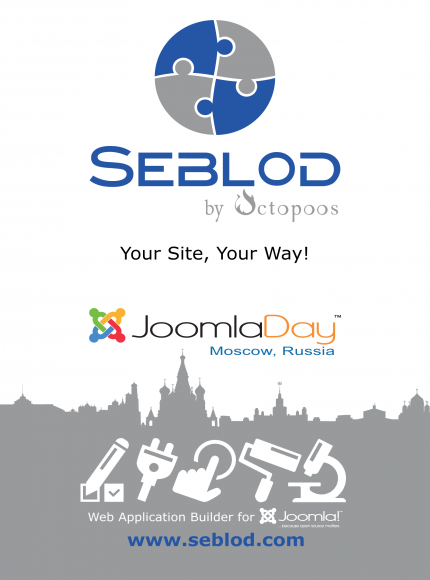 2014-06-26
2014-06-26
Session(s), Sponsoring
www.joomladay.ru
Moscow
Russian Federation
It was the first JoomlaDay Russia and for the very strong community SEBLOD in Russia, it was a duty SEBLOD directly involved.
We were amazed by the involvement of organizers and presenters.
Special thanks to Anastasia Belostotskaya, which brought us infinite help in promoting SEBLOD at this event and for having Vio Cassel override its angoises its first presentation to discuss SEBLOD to the public ;-).
Thank you!
Anastasia Belostotskaya:
JoomlaDay Russia is over and we would like to thank you once more for all your support! That meant a lot to us to get it for the first such event in Russia!
I would also like to thank you for sending Vio to represent Seblod, he did a good job (regardless of whatever he would tell you :)

Vio Cassel:
Joomla!Day was excellent. It was very fun. Sea of positive emotions. I met many developers. I was very nervous before going on stage.
After my speech, I went into another room, where there was a bar, coffee and area of communication. I was approached by people. They asked me questions. They are very much interested in SEBLOD. They never heard of SEBLOD. For them it is something new! They need a tool to create COMPLEX sites. And they found out about SEBLOD on Joomla!Day. WOW!

You are here: Home/Community/Events/JoomlaDay Russia 2014